Pierre was an immigrant to Canada, arriving by 1639.


Details of the family tree of Pierre appear below.

Thanks to Micheline MacDonald for providing this information.

Québec Généalogie - Did you know? The Headless Ghost of Mary Gallagher

Québec Généalogie - What is a 'dit/dite' name?  When the first settlers came to Québec from France it was a custom to add a 'dit' nickname to the surname. The English translation of 'dit' is 'said'. The Colonists of Nouvelle France added 'dit' names as distinguishers. A settler might have wanted to differentiate their family from their siblings by taking a 'dit' name that described the locale to which they had relocated. The acquiring of a 'dit' name might also be the result of a casual adoption, whereby the person wanted to honor the family who had raised them. Another reason was also to distinguish themselves by taking as a 'dit' name the town or village in France from which they originated. This custom ended around 1900 when people began using only one name, either the 'dit' nickname or their original surname.

Québec Généalogie - The Seigneurial System (1627 - 1854)
The seigneurial system was a form of land settlement modeled on the French feudal system. It began in New France in 1627 with the formation of the Compagnie des Cent-Associés (or Company of 100 Associates), which was initially responsible for handing out land grants and seigneurial rights. The land was divided into five by 15 kilometer plots, usually along major rivers like the St. Lawrence. They were then further subdivided into narrow, but long lots for settlement. These lots were usually long enough to be suitable for faming, and they provided everyone who lived on them with equal access to neighbouring farms and the river. There were three main groups of people who lived off the land in this system: Seigneurs, Habitants and Engagés

Pierre GAREMAN dit LEPICARD was a habitant.
Habitants were usually farmers or labourers who were initially brought over from France to live on this land. They had to pay rent and taxes to the seigneur, though they co-owned the land with the seigneur, and even had to work entirely for the benefit of the seigneur a few days each year.

Source: Canada in the Making (www.canadiana.ca/citm/index_e.html) 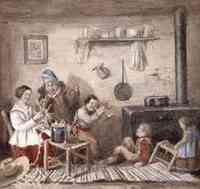 Habitants played an essential role in creating a permanent, settled population along the St. Lawrence River. But it was not an easy life...

Habitants had to clear the land, build a homestead, and plant and harvest a crop. The first task was never-ending, while the last one was annual. Building and repairing the house and barn were continual tasks. So were cutting and hauling firewood. The habitants had to be largely self-reliant in looking after all routine tasks such as cooking, baking, making furniture, and repairing tools. They had to attend to the educational and medical needs of the family. They had to endure the harsh physical climate and rough terrain, largely unaided by government support. The habitants had to pay taxes to the seigneurs and the church.

Genealogy research for Pierre Gareman Dit Lepicard (on other sites)

Is Pierre GAREMAN dit LEPICARD YOUR Ancestor? Tell us more!

If you'd like to be contacted by others who are related to Pierre GAREMAN dit LEPICARD, leave a message here!
The comments you read here belong only to the person who posted them. We reserve the right to remove off-topic and inappropriate comments.