Hard Work of Removal May Have Renewed It.

GREENFIELD, May 25 - Ernest D. Hamilton, cashier of the Southbridge national bank of Southbridge, Mass. left the bank Tuesday at 3 p m., took a trolley car on his way to Springfield to take an afternoon train out of that city for Greenfield, and has mysteriously disappeared.

Judge Henry J. Field, Thomas Manning, chief of police, and James A. Whitbeck, all personal friends of the missing man, went from Greenfield to Springfield last evening in the auto of Judge Field, visiting the police hospitals, hotels and station agent officials in Northampton, Holyoke and Springfield, endeavoring to locate the missing man. They were only able to get a clew that Hamilton was at Brimfield on the trolley line near Palmer, about 4 p m.

Judge Field, Chief Manning and Mr. Whitbeck came bac to Greenfield. They or other friends kept the wires hot during the night. Finally it was learned that Hamilton had been seen on Main st, Springfield, shortly after 5 p m Tuesday by Mrs W. A. Fowler and reporter French. Mrs Fowler knew Hamilton well in Greenfield, and reporter French knew Hamilton when both were living in Orange. There is no clew to his movements later than about 5. The conductor of the train leaving Springfield at 6:15 p m thinks that Hamilton was on his train, but is not certain.

There is not the slightest suspicion of wrong doing on the part of Mr. Hamilton. He has been cashier of the Southbridge bank only a few weeks. He was formerly teller of the Franklin county national bank at Greenfield, and held the same position with the Orange national bank before he came to Greenfield. He is held in universal esteem. Three years ago, when Hamilton moved from Orange to Greenfield, he had an attack of loss of memory. He found himself one night on his hands and knees near the residence of his father on Chestnut terrace, with a cut on his face. The attacks are due to liver trouble.

Since going to Southbridge he has been working very hard in getting in touch with his work. Mrs Hamilton is in Greenfield and is staying with the father of Mr Hamilton, an ex-postmaster of Greenfield, at his home on Chestnut terrace. Mr and Mrs E D Hamilton have a child only 11 weeks old, and Mrs Hamilton has not been specially well since her husband went to Southbridge. They had recently broken up housekeeping at their modest home on Union st, preparatory to moving to Southbridge.

Mr Hamilton, when he left Southbridge, was on his way to Greenfield to make arrangements to move his family and good to Southbridge. When he failed to reach home Tuesday night, Mrs Hamilton, his father and other friends were naturally disturbed at his nonarrival. When he did not come here Wednesday they began to make inquiries, but could not locate him. Judge Field, Chief Manning and Mr Whitbeck volunteered their services and did their best.

Hamilton is a Greenfield boy, a member of Republican lodge of Masons, a member of the Second Congregational church and other organizations of Greenfield, and is a fine singer, having been a member of the church choir. He married the daughter of Ex-Senator Smith of Athol.

Judge Field, Chief Manning, Mr Whitbeck and W. B. Keith are continuing their search by auto this morning. They will take in all cities and towns between here and Springfield.

It is said that he had just purchased a house in Southbridge. If Hamilton is not located before this afternoon, a reward will be offered by his friends for finding him or his body.

The search for Hamilton was fruitless up to 2 p m. During the forenoon an automobile party traveled the roads between here and Springfield, but without result. Another party scoured the outskirts of Greenfield, while others kept the telephone wires busy, calling surrounding towns.

The automobile party is searching in Springfield this afternoon, as Hamilton was seen in that city Tuesday afternoon by Mrs W. A. Fowler and reporter French, both of whom say that Hamilton appeared to be himself at the time. He was on Main st, hurrying toward the railroad station.

Some of Hamilton's friends here believe that he was mentally disturbed at the time and took a western train by mistake instead of boarding one for this place. Others think that he is in some house between here and Springfield. They think that he was taken ill while on his way and went into some house on the roadside and is being cared for. 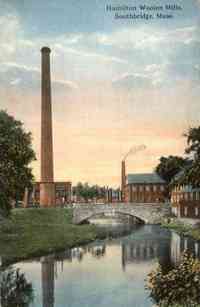 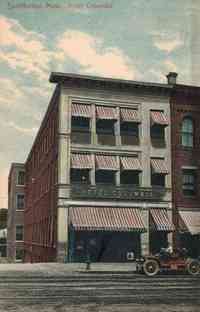 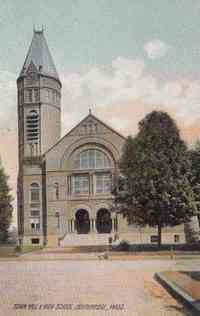