and augmentation, seigniory, in the co. of Kamouraska, is bounded N.E. by St. Denis; S.W. by Ste. Anne; in the rear by Ixworth in front by the St. Lawrence. - 2 leagues in breadth by 1 1/ 2 in depth. Granted, Oct. 29th, 1672 to Sieur de la Bouteillerie. The augmentation, 2 leagues in front by 2 in depth, was granted, Oct 20th, 1750 to Dame Genevieve de Ramsay, widow of Sieur de Boishebert: they are now the property of --- Casgrin, Esq. - 2/ 5 of this S. are under cultivation and 3/ 5 in a state of nature; 1/ 4 is rendered unfit for cultivation by mountains and ridges of rocks. The soil, S. of the river Ouelle, is in general a yellowish loam mixed with sand, and in the front it is alluvial except the ridges which are sandy: most of the lands under cultivation are of a superior quality. The lands in the rear are traversed by a small ridge and in the 5th range is a large cedar swamp; the soil and timber, however, improve towards the fief St. Denis. - There are 7 ranges of concessions in the S. and the whole as far as the 5th range is conceded and nearly the S.W> half of the 5th. The chief settlements are on both sides of the river Ouelle, as far as the 4th range inclusive, and along the main road near the St. Lawrence.The rents are, for the 1st range and the greater part of the 2nd, 1s. 3d. per arpent, for the 3rd range about 1s. 6d. per arpent, the 4th range 3s, 4d., and 4s. per arpent for new concessions. The greater part of the land bespeaks a superior state of husbandry; the arable yields grain of good quality in abundance, the meadow and pasture lands are very luxuriant, and the produce of the dairies forms not inconsiderable portion of the farmer's wealth. The farmhouses and other dwellings are generally accompanied by well stocked gardens and good orchards, their inhabitants enjoying, from all appearance, every comfort that industry can procure among a people wholly cultivators. In the front part of the seigniory there is but little timber; in the rear, however, there is a profuse variety of the best kinds, but chiefly white pine, some black birch, maple, spruce, hemlock & c. and cedar in the swamps. - This S. is admirable watered by the R. Ouelle, many small streams, and by Lake St. Pierre. The tide flows up this R. three leagues over a muddy bar at its mouth, where the water is 10 to 12 ft. deep at high tide, 4 to 5 ft. at low tide, and during spring tides from 14 to 16 ft. Schooners might ascend 2 miles above the bridge. In this R. Salmon and bass are rather plentiful. - IN this S. there are two fisheries in the St. Lawrence, one for porpoises, the other for herrings. The porpoise fishery is deserving of a short description, on account of the facility with which that unwieldy inhabitant of the deep is taken. It consists in a line of boughs and small poplar trees, stuck in the mud at low water 2 or 3 ft. asunder and extending several hundreds of yards into the stream, forming at its farthest extremity a 1/ 4 circular crescent. The porpoises descending the river with ebb-tide, alarmed at the agitation of the boughs and trees, which are shaken by the current or the wind, dare not venture through the line they might so easily destroy, and therefore unwarily remain within the crescent, where they are harpooned and brought to shore. They often measure 10 ft. in length and 6 ft. in circumference and many of the larger size are taken.

Visit Rivière-Ouelle, Québec, Canada (Notre-Dame-de-Liesse)
Discover the people who lived there, the places they visited and the stories they shared. 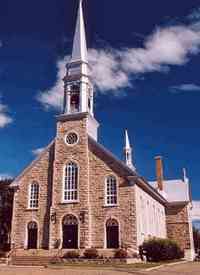