Seignory and Augmentation, in the co. of Bellechasse, lies between Vincennes and La Durantaie and is bounded in front by the St. Lawrence, and in the rear by St. Gervais; its breadth is 3/ 4 league, its depth 1 1/ 2. - Granted Nov. 3d, 1672, to Sieur des Islets de Beaumont; the augmentation, April 10th, 1713, to Sieur de Beaumont and is of the same dimensions as the original grant: they now belong to Fereol Roy, Esq. - The farms are 3 arpents in front by 40 in depth; and the lands conceded prior to 1759 were granted on the following terms: 20 sols per front arpent by 40 in depth, on sol for quit rent, one capon, the obligation of grinding corn at the Banal mill, and with a reservation of timber for the purpose of building churches, mills, & c. - The capon is supposed to have never been demanded. - A great many of these landholders neglected to take a legal contract of concession, thinking that the seignior's letter would be solely sufficient to secure them in quiet possession of their lands. Some unfortunately lost their letters and others lost the copies of their contracts (the minutes of which were burnt at Quebec.) After 1759, when their titles were required to be produced, those who were unable to do so were obliged to obtain new ones, when, instead of 20 sols being required for each front arpent, besides the sol for quit rent, 30 sols were imposed, and more frequently even 40. There are, in this parish, only 9 or 10 persons at most who pay one sol only by way of quit rent, without any other rent. - This tract presents, generally, rather a light and sandy soil and rises to a considerable elevation on the bank of the river, but preserves a tolerably level surface when compared with the adjacent grants. The greater part of the seigniory and a considerable portion of the augmentation are in a flourishing state of cultivation. Adjacent to the St. Lawrence there remains little timber, but, penetrating farther into the interior, much may be found of first rate quality. Several small streams water the S. very plentifully, and the augmentation is intersected by the rivers Boyer and du Sud. The church and parsonage-house are seated on the bank of the St. Lawrence, and a grist-mill is on the Riviere du Sud. The seigniory is crossed by several roads leading into the adjacent grants. - The parish of St. Etienne de Beaumont includes the first two ranges of Beaumont and Vincennes, part of Livaudiere, fief Mont-a-Peine and as far W. as the habitaiton of Jean Boilard.

The parish of St. Charles extends over the augmentation to Beaumont, and is included in the description of Livaudiere, S.

1832 - Bellechasse county, bounded N.E. by the co. of l'Islet; S.W. by the N.E. boundary lines of the SS. of Lauzon and Jolliet and of Frampton, Cranbourne and Watford, and thence by a line prolonged S.E. to the S. boundary of the province; N.W. by the R. St. Lawrence, and it includes all the islands in that river nearest to the co. and in the whole or in part fronting it; and on the S.E. by the S. boundary of the province. It comprise the seigniories of Berthier, St. Vallier, St. Michel, Beaumont and its augmentation, la Martiniere, Montapeine, Vincennes, St. Gervais and Livaudiere, and the townships of Buckland and Standon... it contains 581 sq. m. and seven parishes.. The surface is uneven and in many places, particularly in the rear, mountainous; the soil nevertheless is susceptible of cultivation and produces abundance of good timber. - It is watered by the rivers du Sud, Boyer, Bellechasse, and their several branches, besides numerous other streams that fall into the St. Lawrence. In the front of the co. is a chain of flourishing and interesting settlements. The population consists entirely of French Canadians.


A Topographical Dictionary of The Province of Lower Canada by Joseph Bouchette, Esq., London, 1832

Visit Beaumont, Québec, Canada (Saint-Étienne-de-Beaumont)
Discover the people who lived there, the places they visited and the stories they shared. 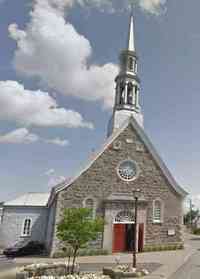