1922 - FAMOUS SHRINE IN RUINS. BASCILICA OF STE. ANNE DE BEAUPRE DESTROYED BY FIRE BUT STATUE AND HISTORICAL RELICS ARE SAVED.

FLAMES BREAK OUT IN SACRISTY, SPREAD TO MONASTERY AND THEN TO BASILICA.

Apparatus Rushed From Quebec Able to Do Little to Check the Blaze -- Brothers Rush Into Blazing Structure to Save Famous Relics -- Scene of Fire Most Famous Mecca of Religious Pilgrims in North America.

Quebec, March 29. -- Fire today destroyed the Basilica of Ste. Anne de Beaupre, famous for its shrine, but the statue of Ste. Anne, with the historical relics to which miraculous cures have been ascribed, were saved.

The flames which started in the sacristy, spread rapidly to the monastery of the Redemptorist Fathers, to whose care the shrine had been entrusted, and then to the Basilica.

Apparatus sent from this city to the most famous mecca of religious pilgrims in North America, was able to do little to check the blaze.
Monastery officials estimated the property damage at $1,200,000. That a greater toll of church relics was not taken was due to the heroic efforts of the brothers who risked their lives in saving what they could from the interior of the Basilica.

Seeing that the great Basilica was in danger, the brothers decided to remove everything of value, Rev. Brother Broneau, at the risk of his life succeeded in carrying out the precious relics and the statue of St. Anne.

The flames soon attacked the Basilica through the roof, which the fire fighters could not reach with a stream of water. In a few moments the structure was ablaze from end to end.

In an incredibly short time, the two 160-foot towers comprising the facade of the cathedral crashed. The Quebec firemen on their arrival did their utmost to save the structure, but they were handicapped by the fact that the local water works could not supply enough water for their engines. They were compelled to lay a line of hose 3,000 feet long to the bank of the St. Lawrence river, which was at low tide when the flames were at their height.

The whole village for a time was in terror. At one time it seemed as if destruction faced the little community which lives for the most part from selling souvenirs to pilgrims during the summer. Just as the villagers had abandoned hope, the wind turned.

The only part of the entire group of buildings connected with the Basilica which was saved was the old chapel, which housed the shrine before the church was erected. The statue of St. Anne will be removed to this chapel pending the reconstruction of the Basilica.

St. Anne de Beaupre, the most famous shrine in the new world, each year has attracted hundreds of the lame and blind, who flocked there from all parts of Canada and the United States to be cured by miracles of their afflictions. Every householder in the village that could offer shelter leased all his spare rooms at exorbitant prices and some times the throng of unfortunates was so dense that the church had to be thrown open at night.

Ste. Anne de Beaupre, a village of a few thousand inhabitants, is located a few miles from this city. In addition to the thousands of pilgrims who annually visited the shrine, there flocked to the village thousands of tourists to gaze upon the famous pile of crutches cast aside by those who declared themselves miraculously cured.

Visit Sainte-Anne-de-Beaupré, Québec, Canada (Beaupre)
Discover the people who lived there, the places they visited and the stories they shared. 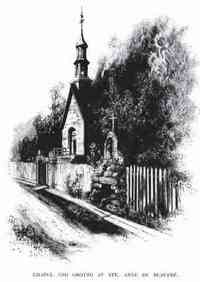 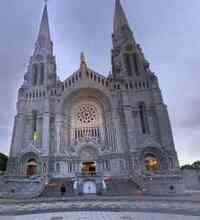