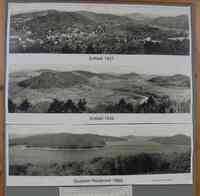 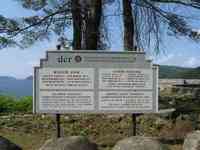 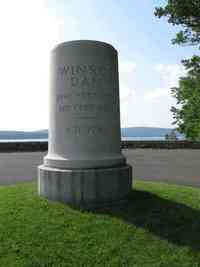 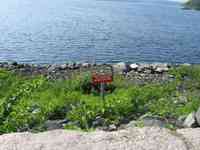 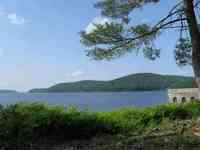 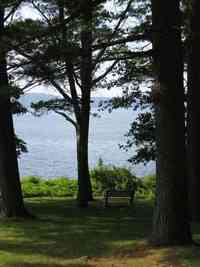 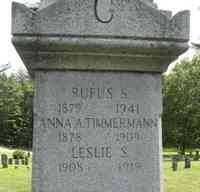 Once upon a time, in the state of Massachusetts, there was a place called the "Swift River Valley"...

"By the later part of the 19th century the valley towns were lively and productive. A branch of the Boston and Albany railroad carried passengers between Athol and Springfield. Known as the "Rabbit Line" because of the number of stops, or short hops it made, the train took three and a half hours to complete the fifty mile trip. Inns and taverns catered to travelers, while industries such as the Swift River Box Company provided work for local residents. Palm-leaf hats, Shaker bonnets, and soapstone footwarmers were made in Dana. Dana and Greenwich were popular with summer visitors, and residents of Prescott relied on farming to provide their incomes. Enfield was originally part of Greenwich; many mills were located there, and it was considered the wealthiest town in the valley.

Westward expansion and industrialization caused the decline of many rural New England towns, and those in the Swift River Valley did not escape the economic hardships and decrease in population as business and residents were drawn to the opportunities offered elsewhere..."

Anna Amelia Timmerman was born in Poquonock, Connecticut in 1879, the daughter of John Timmerman and Augusta Feige, immigrants from Germany. As a teenager/ young adult, Anna moved to Enfield with her family. There she met her future husband, Rufus Seymour Chaffee. They married in Worcester in June of 1907 and made their home in Enfield. The following April, a son was born to the Chaffee couple. They named him Leslie Seymour.

Life, for Mrs. Chaffee, was not going very well. Around 4 months after the birth of her son, Anna became ill with "phthisis pulmonalis" (pulmonary tuberculosis). Six months later, she died, leaving behind her husband and 9 month old son. Anna was 29 years old. Two days after her death, a funeral was held and Anna was buried in Woodlawn Cemetery, Enfield, Massachusetts.

Shortly after the death of his wife, Rufus Chaffee headed to Boston, perhaps to find work. It is possible that his son, Leslie, joined him there eventually. It is also possible that Leslie was raised by his paternal grandparents in Enfield. Unfortunately, Leslie's life was also cut short. He died on August 28, 1919 at the home of his grandparents in Enfield. The 11-year-old boy was buried beside his mother in Woodlawn cemetery. Rufus Chaffee returned to the Boston area. His parents remained in Enfield.

"1919 - A Joint Board of the newly created Metropolitan District Commission (MDC) and Department of Public Health is created. Initial studies of additional water supplies [for Boston] include diversion of the Millers, Swift and Ware Rivers at a proposed cost of $65 Million."

"...Dana, Enfield, Prescott and Greenwich were dealt a final blow when rumors implying the towns would be flooded began to circulate. Property values decreased, and the Great Depression added its financial strain to the problems facing these small communities."

"1922 - Joint report of the MDC and the Department of Public Health is filed. It recommends taking water from the Ware River and creating a massive reservoir in the Swift River Valley."
Friends of Quabbin (www.foquabbin.org/ )

Boston was growing. It is ironic to think that the drinking water needed by Rufus Chaffee in Boston would be the downfall of his birthplace and current residence of his parents. Even though they were 75 miles away, Enfield, Dana, Greenwich and Prescott were about to pay the price for the growth of eastern Massachusetts.

In 1927, the state legistlature passed the Swift River Act. This gave the state the money to build a reservoir in the Swift River Valley. The valley would now have to be cleared of all buildings, vegetation and people (dead or alive). The residents were basically given no options.
Source: Pamphlet - Quabbin Park and Reservoir, DCR Massachusetts

In 1930, the 497 residents of Enfield included Rufus Seymour Chaffee's parents, Norman Seymour Chaffee and Anna Jane Lanphere. They were in their 80s and Enfield had been their home for over 60 years.

"1932 - Metropolitan District Water Supply Commission votes to call the reservoir Quabbin, a Nipmuck Indian word for the place or the meeting of many waters.

"Homes and factories were puchased from the townspeople, then razed or moved. Large tracts of land were puchased including 25,000 acres for the reservoir alone. The land which was to be flooded was clearcut and burned. The state removed 7,613 bodies from the valley's 34 cemeteries and the majority (6,601) were reubried at Quabbin Park Cemetery. On April 28, 1938, Dana, Enfield, Prescott and Greenwich officially ceased to exist and the 2,500 people who once populated the towns and villages no longer had a place to call home."
Source: Pamphlet - Quabbin Park and Reservoir, DCR Massachusetts

Norman Seymour Chaffee died in 1935 at the age of 86. His wife died two years before him. Neither lived long enough to witness the flooding of their beloved town of Enfield; however, the uncertainty of their future must have weighed heavily on them in their final years.

"Filling commenced on August 14, 1939 and was completed in 1946 when water first flowed over the spillway. The Quabbin Reservoir was filled with water from the Swift River and flood skimming from the Ware River during eight months of the year. At the time, the 412 billion gallon reservoir was the largest man-made reservoir in the world which was devoted solely to water supply."
Source: Massachusetts Water Resources Authority website - www.mwra.state.ma.us/

Rufus Seymour Chaffee died in 1941, before ever getting a chance to sip a cold glassful of Quabbin water. Did he witness the demise of his hometown and the beginnings of what is now the Quabbin Reservoir? It is difficult to imagine how he must have felt to lose his wife, son, parents, hometown, and to bury his wife and son twice.

When I look out at the Quabbin through the eyes of a curious tourist, all I can see is its beauty. Examining its history, I picture a steady flowing river born of the tears of 2,500 people, slowly engulfing their lives, drowning their dreams and submerging their memories - just about enough water to fill a reservoir.