The Car Jack and the Hair Brush 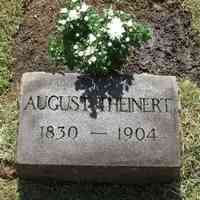 It was supposed to be a cool autumn New England-type day, but typical of New England weather predictions, it turned out to be quite warm. We were in Connecticut on a mission: Find our ancestor's gravestone and rescue it from the destructive forces of time and nature. Armed with a map and an unfamiliar vehicle (which periodically threatened to trap us in its seat belts), we entered the cemetery, quite pleased that we had found it easily. Now, to find the gravestone. Gail was trying to locate the grave on the cemetery map; however, there were no signs inside the cemetery to indicate our location. I was trying to maneuver the unfamiliar vehicle routinely driven by my husband (and avoided by me). Deciding we had been car-bound long enough, I pulled over into what seemed to be an area large enough to fit the van. "Let's just get out of this van and then we can figure out where we are and find the grave." Once we got out, I immediately spotted the grave we were looking for. It was right next to the van. How convenient?

Feeling a bit fortunate that we didn't have to wander around the cemetery in the heat, we went about our task. August's grave, in that location since 1904, was slowly being reclaimed by the Earth. It was sinking out of sight and it was going to be lost for all time. Though we never knew him, he is a part of us. We began to dig, at first carefully around the perimeter of the gravestone. It wasn't long before we realized that this was some of the toughest grass we had ever encountered. Out came the big shovel. That seemed to do the trick and work progressed fairly quickly from that point forward. Our next problem: The stone was heavy. We needed leverage to lift it from the hole. Wishing we had brought a crow bar, we thought about the problem and decided the car jack might do the trick. Removing the car jack from the van wasn't easy. The people who designed it really should have made the compartment where it is stored bigger than the jack itself. Once removed, the jack was not as long as we had wished. Somehow, between the jack and the shovel, we were able to get the leverage we needed and together we rolled the stone over up onto the grass.

At this point, we examined what we originally thought was a pesky rock that had been hindering our excavation efforts. Upon further digging and examination, we determined that it was the original base for August's stone. We cleaned it off and rolled August's stone on top. We filled in the hole left where we dug out the stone, which apparently had slipped off its base over time. Then, we planted mums - some for August and some for his daughter whose grave was nearby. Gail didn't like the looks of August's stone which was all covered with dirt. Water and our hands could do little to rectify the problem. That's when Gail walked over to the van and returned with her hair brush. The hair brush served as a more-than-adequate dirt removal tool.

Feeling pleased with the results of our efforts, we turned our attention to the fact that we were now dirty and sweaty. Gail returned to the van for a new change of clothes while I found the cemetery's water supply and used it as a make-shift "shower".

We took pictures of our rewarding "work" and headed on to part two of our adventure - another town, another ancestor...