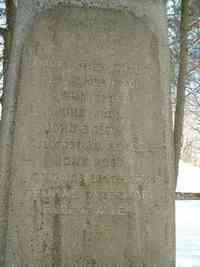 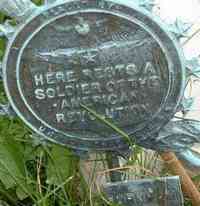 In tracing my family, I discovered that I am a direct descendant of Thomas Waterman (one of the founders of Norwich, CT) and his wife, Miriam Tracy. Their daughter, Lydia, married Eleazer Burnham. Lydia and Eleazer had a son, Eleazer, who married Mary Norman. Their son, Asa Burnham, was a soldier in the Revolutionary War. He married Lucy Huntington. Asa and Lucy had a daughter, Charlotte Maria Burnham. She married Sherman Smith. Their daughter, Caroline Smith, married George W. Salisbury (who fought in the Civil War). Caroline and George had a daughter, Charlotte, who married George W. Feige. Their son, Willard, was my great-grandfather.

To make a long story short, when I began reading about Thomas Waterman, I found it interesting how he was one of the original purchasers of Norwich. I traveled to Norwich to Founder's Cemetery, Post Gager Burial Ground, to view the founder's monument. It was only after quite a bit of research that I discovered that he was the great-grandfather of the famous Benedict Arnold.

While my path took me through time following the "footsteps" of Thomas' daughter, Lydia, the path through Lydia's brother, John, was much more publicized. John's first marriage was to Elizabeth Lathrop. Elizabeth was the daughter of Samuel Lathrop and Hannah Adgate. (Hannah's father, Thomas Adgate, is also one of my direct ancestors). John Waterman and Elizabeth Lathrop had several children. In 1733, their daughter, Hannah, married Benedict Arnold. Their son, Benedict Arnold, Jr., was the famous traitor.

It appears that none of the parents or grandparents were alive at the time of the treason in September of 1780; however, my ancestor, Asa W. Burnham (cousin of Benedict Arnold) was a soldier in the Revolutionary War. He was 27 years old at the time of the treason. His cousin, Benedict, was about 40. I noticed that Asa was living in Connecticut in 1779 and in Shaftsbury, Vermont in 1781. Hmm… Coincidence? Or was there another reason for the move?